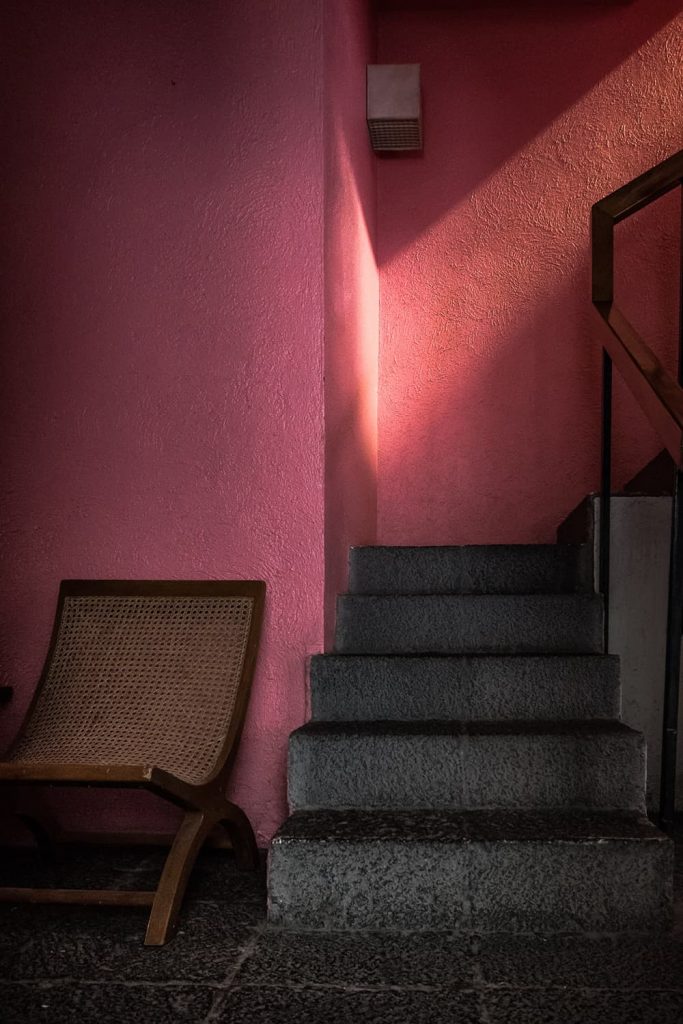 It reflects a key and turning point in the architect’s activity, designed and built between 1940 and 1942 and inhabited by the architect from 1942 to 1947 when he sold it to Mr. Alfredo Ortega, a silversmith from Mexico City, another artist and designer in his midst, to raise capital for the development of Jardines del Pedregal. In this house it is the first time that he works for himself and when he only inhabits it for five years, he leaves us the testimony without change or modification, of his thought about architecture and the art of making gardens at that time, the latter being his true inspiration. for this realization.

In this regard, Barragán declares: “In 1941, I made my first garden in Mexico City. I acquired a piece of land with different levels, I complemented and leveled different platforms to create a garden in compartments, recalling the beauty of the patios and gardens of the Alhambra and the Generalife in Spain “

The peculiarity of this garden house together with the current museum house is that they are the only ones that he designed and built to inhabit them himself until his death. The essential difference between this house and his second house is the freshness to deal with vernacular and colonial themes, without being a vernacular or colonial style house itself; with details of his houses in Guadalajara, without belonging either to this early stage of his work; also with elements of its modern architecture from the 35 to 40, but no longer belonging to this stage and with architectural and spatial elements of its next and last stage, the best known, but not yet belonging to it.

Unique characteristic of this house and gardens is that although it does not have the architectural coherence of its second home, the museum house, it is that the spatial and sequential richness in interiors and exteriors, the visual surprises and perspectives, are of such quantity, richness and profusion, which in his subsequent works do not appear again concentrated as in this house.

The garden house has preserved its original design along with the gardens that after almost 80 years, have been maintained with the natural and intentional plant variations that the passage of time and its inhabitants have given it; But despite this and the aggressive modification of its surroundings, the harmony and strength of the initial landscaping project are so great that even today these gardens are as impressive as they should have been when they were originally created.

Today this house is open to the sight of all, with its original period furniture, with designs by the famous Clara Porsett, Michael Van Beuren, George Nelson and Barragán himself and his cabinetmaker Eleuterio Cortéz. The least known, published and publicized house of all and yet the first which was the starting point to his later works. An unknown Luís Barragán, barely visited and less studied. The beginning and keypoint of the maturity of its architecture.

Visit us and discover the best kept secret of Luís Barragán. 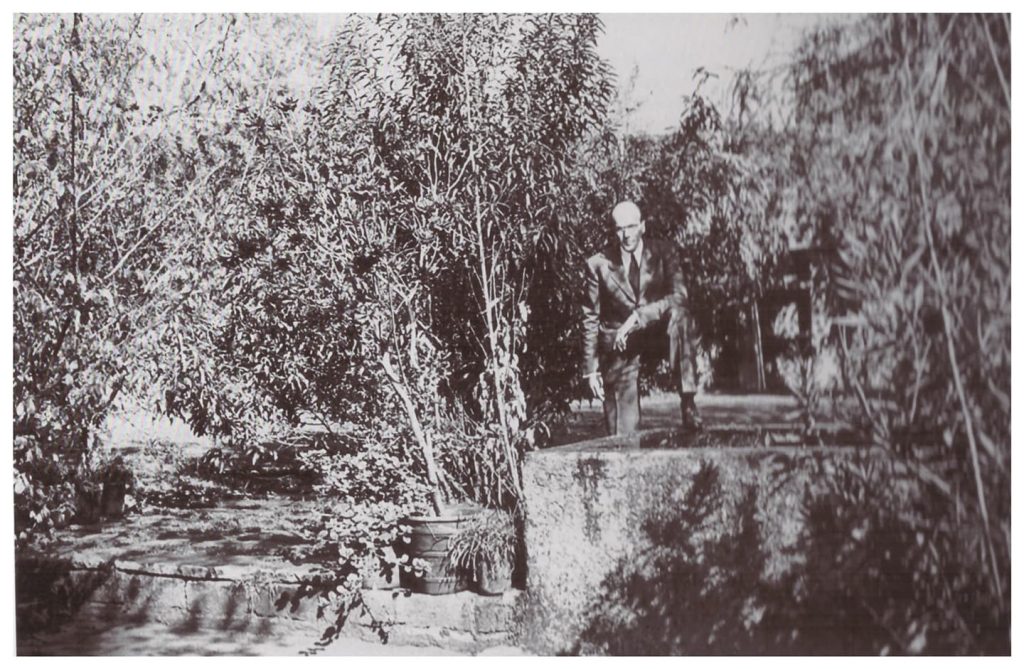 Summary of his professional biography

First and only Mexican winner of the Pritzker Price (1979)

He graduated as a civil engineer in 1924, traveling immediately to Europe where he stayed for a year and a half (1924-1925). When he returned to Mexico, he did not get the title of architect because the faculty had closed. However, that trip marked his passion for garden architecture, not only, he visited the Universal Exhibition of Decorative Arts in Paris (1925) where he discovered the exhibition of modern gardens and especially Ferdinand Bac’s book “Les Jardins Enchantees” from which he buys several copies to take to Mexico, but also he gets to know the modern work of Frederick Kriesler with his Austrian pavilion in this exhibition, a pavilion that influences him conceptually.

He also visits the Alhambra and the Generalife in Spain, their patios and gardens, of which he is impressed and always keeps in his memory the surprising experience of access to the “Patio de los Mirtos”. There is a photograph of him in the courtyard of the acequia in the Generalife that testifies to this visit.

From 1925 to 1935 he carried out his first projects in Guadalajara with Mediterranean influences and Bac’s concepts of patios and gardens. Belonging to this stage are more than 30 houses, of which only as an iconic example we can mention Robles León (1929), today Casa Clavijero ITESO or Casa Cristo (1930). Also his first urban garden project, won by competition, the Revolution park (1935) or red park.

In 1930 his father died, so he dedicated himself to arranging family businesses until 1932, when he returned again to Europe and discovered modern architecture through Le Corbusier since he had the opportunity to meet him personally, also visiting the Beístegui attic where Capture the intention of the flown staircase was first reinterpreted at Casa Ortega and also visit Villa Savoye, an icon of modern architecture. He personally knows Ferdinand Bac and visits his gardens at Les Colombieres in Mentón, the French Riviera, which he will later also reinterpret at Casa Ortega.

In 1935 he moved to Mexico City where he began a frenzy, building around 20 private and rental houses, 14 residential and mixed buildings, remodeling and restoration of 2 churches, a cinema and office building. Examples of houses include the house and studio of José Clemente Orozco (1938-1939) and the building for 4 painters (1939-1940) in collaboration with Max Cetto.

In 1940, tired of so much activity and pressure from his clients, he decided to “withdraw” from dealing with them and here we would have to wonder how much it influenced finding the land in Tacubaya suburb in Mexico City, where initially between 1940 and 1942, he built his first house and gardens, the latter being the main motivation for this realization, the Casa Ortega today, according to how he imagined them: his memories of the haciendas of his childhood, the gardens of Bac, the Alhambra, the Generalife and his vision of modern European architecture. But these gardens will also be the sample of his landscaping ideas from now on.

He lived in this house for five years from 1942 to 1947 when he sold it to the master and silversmith businessman Alfredo Ortega, a visionary of the quality and depth of the design of the “engineer” Barragán’s house. Then in 1947, he built what will be his last house, modifying it and inhabiting it until 1988, the year of his death, the now-museum house, in one of the gardens and next to Casa Ortega.

Of course, his “retirement” is temporary since he resumed his professional activity and from 1942 to 1944, he built 5 houses, one of them in his native Guadalajara with its garden, as well as a duplex house and 4 private gardens, one of them being the so-called “El Cabrío” on the edge of Pedregal.

In 1945, he began to change his interest from internal to external, public and private spaces, with the development of the Jardines del Pedregal subdivision and although he would continue to build some houses, he began to project fountains, squares, and gardens, shown in such developings. The few houses that he built, he chose them for the interest of the realization of his gardens and patios, beginning with the Mereles house (ca. 1948), the iconic Prieto López house (1948-1950), a house and garden sample (ca. 1950-1952) in collaboration with Max Cetto, etc. more than 10 houses and their gardens including the iconic Casa Gálvez (1955-1957) and Casa Gilardi (1976-1977). Special mention should be made of the chapel and restoration of the convent of the Sacramentary Capuchin nuns of the Pure Heart of Jesus and Mary (1953-1960) where it accelerates a process of abstraction of its architecture that culminates with the Gilardi house and which he had started in his second home.

Starting in the mid-1950s, a series of residential subdivisions, gardens and squares began. Developments such as Jardines del Bosque in Guadalajara (1955), Las Arboledas (1958-1961), Los Clubes (1961-1972), Lomas Verdes together with Juan Sordo Madaleno (1964-1967). Squares, fountains and monuments such as the Plaza del Cigarro and the central park in El Pedregal, the iconic Satellite Towers (1957), the gardens of the Hacienda Golf Club (1963-1965), the Bebedero and Lovers fountains in The Clubs or the lighthouse of commerce in Monterrey (1977-1984).

As well as a large number of housing projects and urban developments not carried out.